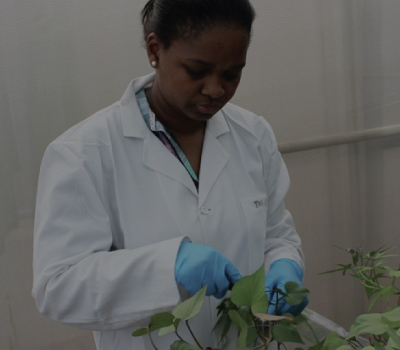 AWARD Fellow Nkumbu Mutwale, a research officer at the Zambia Agriculture Research Institute, recently spoke to some 250 female students at Kabunda Girls Secondary School in Mansa, Zambia, a poor rural area where people earn their livelihoods through fishing and cassava cultivation. Early marriages are common here and education is not always valued.

“I met in advance with the head teacher, who gave an overview of the school and the challenges it faces early marriages, poor reading culture, and missed lessons,” says Mutwale. Her focus was to encourage the girls and motivate them to aim high despite their circumstances. Teachers, farmers, and researchers also participated.

The role-modelling event panel included the district veterinary officer, a female doctor who talked about the importance and value of education, and a fisheries officer who spoke on agriculture as a science. “I introduced AWARD and I talked about my achievements in an effort to encourage them,” says Mutwale. “The students had no idea that agricultural science has so many disciplines—they thought that once you take up the subject you have to become a farmer.”

Mutwale says the head teacher was very pleased with the event. “Some girls asked questions about how they can apply to university, and what qualifications are required for various schools—something that was surprising even to the teachers, because the girls usually want to discuss marriage-related issues,” says Mutwale. “The head girl gave a vote of thanks and even prayed for the speakers, because the students were so happy that other people have hope in them and cared enough to come to talk to them.”

The role-modelling event was advertised on the only local radio station three times daily for two days. The station manager was surprised that there were female scientists in the province, and Mutwale was asked to begin writing agricultural articles for the station’s newsletter. “I recorded an interview for their career corner, where I introduced AWARD and gave a motivational talk to encourage girls. I made arrangements for the other two female scientists present to be interviewed as well,” says Mutwale. The radio manager has since invited her to go on air again whenever she is in Mansa.

Previous
“Feel the Fear, and do it Anyway” Zambian 2014 AWARD Fellow Chapwa Kasoma finds fr...
Malawian Farmers Learn to Earn More from Their Sweet Potato Crops
View Other Stories Next