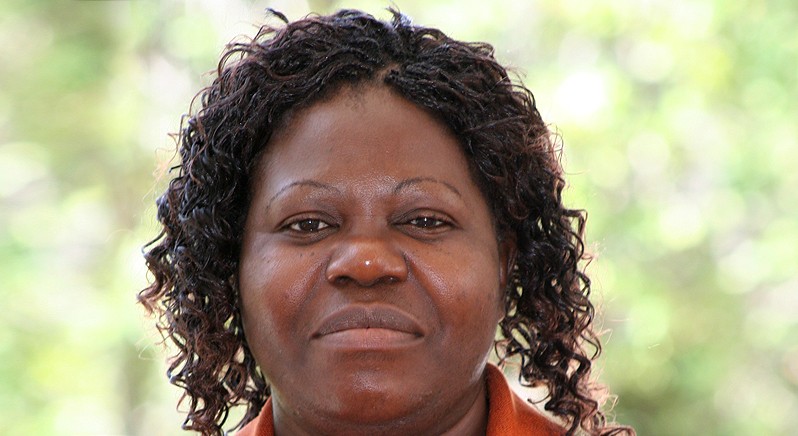 Sharing her knowledge and expertise about sweet-potato breeding, AWARD Fellow Dr. Felistus Chipungu encouraged a group of Malawian farmers to look at new applications and techniques for their sweet potato crops. Her successful training event, held at the Nsikawanjala extension planning area in Mulanje district, drew some 200 farmers, the majority of whom were women.

“I explained how processing of sweet potato can result in increased income for farmers and can sustain production,” says Chipungu, a national horticulture research coordinator and sweet-potato breeder with the Ministry of Agriculture and Food Security. The farmers were also interested in hearing her ideas for using the excess sweet potatoes that are typically produced.

The AWARD-sponsored event called for a great deal of advanced planning. “Five months earlier, we planted improved varieties of sweet potato so we could begin the event with a field demonstration,” Chipungu, the sweet potato production advocate explains. Farmers responded enthusiastically as she introduced production technologies that will increase their yields.

“They were also encouraged to grow and eat orange-fleshed sweet potato and its processed products for beta carotene, which is converted to an important nutrient (vitamin A) in human bodies,” Chipungu says.

Chipungu showed the women how they can turn locally produced sweet-potato crops into a viable business. With financial support from the Malawi government, the International Potato Center, and the Alliance for a Green Revolution in Africa, she installed a low-cost oven and trained the farmers on how to use sweet potato in the baking of scones, breads, and other products. “One-third of the imported, expensive bread flour will be replaced with sweet potato,” explained Chipungu. “Locally produced bakery products will have a price advantage and will therefore be competitive.”

Chipungu says the farmers were delighted, never dreaming that they would some day become bakers, and the new bakery will increase their livelihoods.

Dignitaries, including the Member of Parliament for the constituency, as well as divisional, district, and local agricultural and nutritional officers, attended the event, which was covered on local television and by national newspapers.