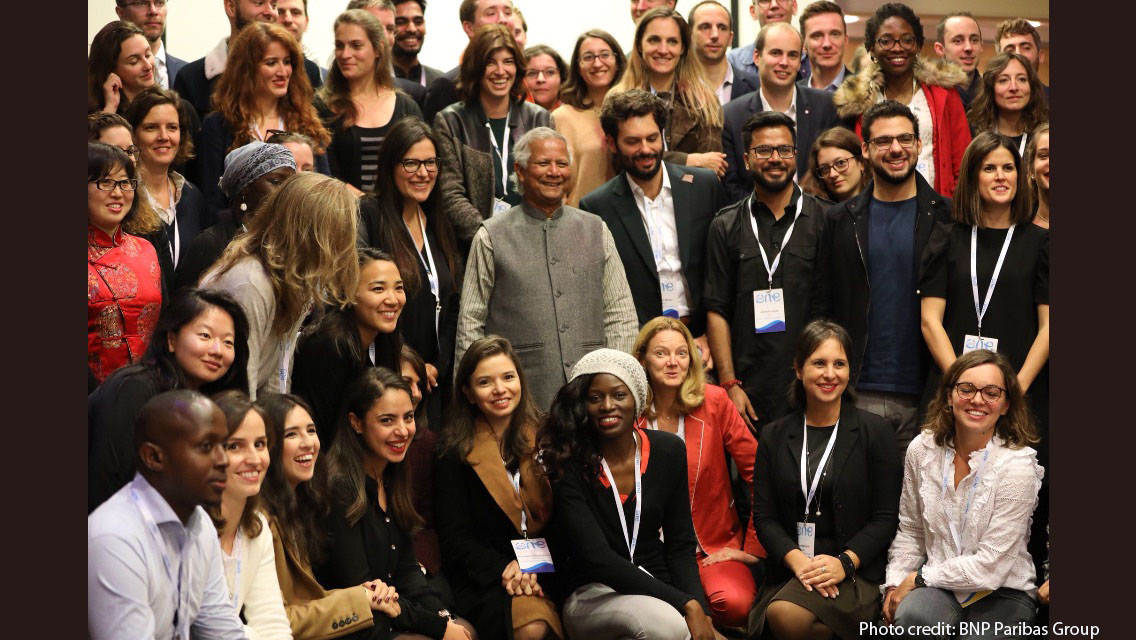 (Photo: BNP Paribas delegates, among them AWARD representatives, meet with Prof. Muhammad Yunus just before the kick-off of the One Young World summit)

This years’ One Young World (OYW) summit couldn’t have been held in a better place at a more opportune time. At the Hague, the international city of peace and justice, the One Young World summit dabbed #OYW2018 leveraged its global platform to address ways in which young and emerging talents can demonstrate leadership abilities and commitment to effecting positive change. Looking back, the summit did indeed set the stage for a much-needed conversation and action on themes on leadership, democracy, and inclusion.

The annual summit brings together valuable young talents around the globe to debate, formulate and share innovative solutions to achieve the Sustainable Development Goals (SDG’s). I was honored to be among the diverse group of 1, 800 plus delegates from over 196 countries. The summit also had global representations from various private and non-profit industries among them BNP Paribas, Standard Chartered, Yunus Centre, the Dutch government, BP Global, and the Coca-Cola Company. The event drew in notable speakers from various disciplines such as Nobel laureate, Professor Mohammad Yunus, Antoine Sire, Sir Bob Geldof, Terry Crews, Caroline Mutoko, Chief Marketing Officer Radio Africa Group, Kenya, Thuli Madonsela, Tawakkol Karman and Mo Ibrahim.

“Be unrealistic. Create the kind of society that you really want. Think big. Think totally unreal. That will drive you. Think big but start small,” Prof.  Mohammad Yunus.

I found these words by Prof. Yunus very insightful because, young talents are always urged to take up leadership roles and drive change when often, what we have are skills, enthusiasm, and imagination. It was refreshing to hear more emphasis on how important it is for young and emerging talents in every discipline to acknowledge that they have a role to play in achieving both their career goals and that of their institutions. Prof. Yunus also reiterated the importance of mentoring, partnerships and women empowerment saying that they are fundamental to changing the narrative around social, economic and leadership in every space.

His thoughts were echoed by Antoine Sire who, while speaking about digital revolution and inclusion, reinforced the idea of working together to ensure a human side of the world of tomorrow.  He pointed out that partnering with organizations that value equality and diversity help drive a positive change. He further highlighted that such collaborations enable individuals to decide their future and escape the stifling struggle of inequalities. “No company or organization can win in a world that is losing,” he concluded.

There is, indeed, an undeniable strength in partnership and mentoring. To have a legacy that leaves impact sometimes means a collective action.

One of my highlights during the summit was to hear from the returning One Young World ambassadors. Each story different from the other yet equally inspiring. In every story told there was passion, drive, and fire, the kind that compels you to change for the better. Their experiences shaped their initiatives and courses they champion for. From science, human rights initiatives, entrepreneurship, education to climate change adaptation initiatives, the ambassadors urged their peers to stand up and take action to build a legacy that is different from what they were given by the older generation. It is the only way that we can build a sustainable society. Kamillah Knight, one of the returning ambassadors reminded us of one important tool that we have in our hands; power. “Power gives us the freedom to make our own choices,” she echoed.

One Young World provides a lifetime opportunity for young leaders to create lasting networking communities, find common grounds and create solid partnerships across borders that form narratives around conversations that shape the world. Participating in the #OYW2018 was quite enriching for me. Not only did I have an opportunity meet, interact, observe and learn from renowned world leaders, but also because now, I am part of a huge and diverse tribe of young talents prepared to take on the world. I am a One Young World Ambassador!

One Young World was founded in 2009 by David Jones and Kate Robertson. It is a United Kingdom-based charity that gathers together the brightest young leaders from around the world, empowering them to make lasting connections to create positive change.