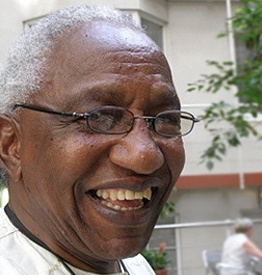 Professor Shem O. Wandiga is a Professor of Chemistry at the Department of Chemistry and Director, (Ag.) Institute for Climate Change and Adaptation, at the University of Nairobi. He has a PhD from the Case Western Reserve University, U.S.A. Prof. Wandiga was also the Deputy Vice-Chancellor (Administration and Finances) of the University (1987-94). He was elected as Kenya’s representative to the Executive Board of UNESCO (1995-99), President of the External Relations and Program Commission of the Board (1997-99), and member of the General Committee and the Advisory Committee on Environment of the International Council for Science (ICSU) (1999-2002).

He is a Fellow: World Innovation Foundation (2002-); IUPAC (2004- ); AAS (2006-), Fellow Royal Society of Chemistry (2010), Member: American Chemical Society (2010). Prof Wandiga was a member of the International Jury UNESCO Kalinga Prize for the popularization of Science (1999-); member of the Board: UNESCO’s International Basic Sciences Programme (IBSP) (2004-2010); member of the Advisory Board, IDRC/DFID Project: Climate Change Adaptation Support Programme for Action Research and Capacity Development in Africa (CCAA) (2006-2008) and awarded the UNESCO Medal Prize for the promotion and development of nanotechnology and nanoscience on 10th April 2015. He is an author of 137 papers, 134 conference presentations, 26 books and chapters in books, 12 public lectures at international conferences, 10 government reports, and 13 consultancy reports.

He has chaired several national committees on university education and been a consultant on World Bank, UNESCO, and UNEP projects undertaken in Kenya and Eastern Africa. Prof. Wandiga was the Chairperson of the Kenya National Academy of Sciences from 1992 – 2002, and Chair of the Pan African Committee of START (2001-2007) as well as past chair of the National IGBP Committee. He was awarded a certificate by Ministry of Environment and Natural Resources, Government of Kenya (2004), for outstanding work on Hazardous and Toxic Chemicals and Pesticides.